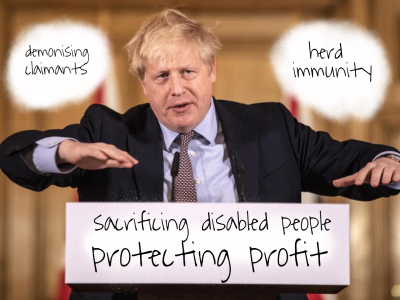 Boris Johnson’s argument for an acceptable number of deaths for herd immunity to work is a useful analogue to look back at how propaganda about benefits was to push through austerity.

A lot of arguments about benefits hinged on an idea of mythical distinction between deserving and underserving benefit claimant, the ‘you’re alright mate it’s that other lot’ attitude (an argument also known to people who put up with racism at work), like some petty gangster protection racket we were supposed to accept that argument about ourselves, whilst selling out other claimants in the hope we wouldn’t be picked on ourselves. Obviously on accepting this protection, we are no longer allowed to criticize government policy as were we to we would subsequently lose the protection offered by the prejudiced person taking us under their wing. The protection is flimsy though as of course whilst this person is ‘acknowledging we are different from those ‘others’’, obviously so in order not to have to challenge his own prejudices given he knows more details of your case, he has to separate you as exceptional to ‘those others’ he is talking in ignorance about (so in fact the ‘protection’ is also for his own ignorance from his conscience) and you arguing your defence based on a more universal principle challenges that. However, there are others offering the same ‘protection’ to others that they in turn know who are ignorant of you. If you get shit from them, your ‘protector’ has to challenge his ideological affinities with the other bigot, and you are just expected to get used to it. So, you can be ‘killed’ at any time, where being ‘killed’ is a metaphor for putting up with prejudice, just so long as you don’t rock the boat, so the ‘protection’ is in fact just from each individual bigot.

Given this, let’s return to herd immunity. A certain number of people have to take a fall, die basically (not a metaphor this time), so the others can be protected (herd immunity – but based on poor science), an ideological argument that is in fact cover for protecting the economy. If we turn back to the early days of austerity, the attack on benefit rights came early. The first Household Survey after the coalition came to power showed a large drop in attitudes of respect for benefits, an acknowledgment of rights that had previously been stable for some time amongst the broader population.

The purpose of this change in attitude from the propaganda pushed by the government was to push through austerity, as there had been a crisis of capital it was necessary for the capitalists to consolidate their class position, this means, using Thomas Piketty’s formula for inequality, r>g (where r is the return on capital, and g is growth), increasing r again (after its drop) relative to g. Given g is growth, that includes both wages and profit from production (total revenue of all ‘firms’ – GDP (excluding dividends from shares and rents)), and that wages are paid based on the supply and demand in the marketplace for labour, but all labour-time contributes to total revenue, thus profit is the difference (after costs), then to increase r, wages had to be kept low. But this needed to be sold to wage earners. It’s quick to point to the demonisation of benefit claimants, but in an inverse of Cameron’s argument that ‘it wasn’t right that people earned less than those claiming’, it is in fact true that therefore benefit claims, especially the ‘humanitarian measure’ of how much was needed (based on relative poverty measures – in fact this form of measuring poverty was also attacked as part of the propaganda), were in fact a bottom level it is true below which it was not worth working (hence also the need for punitive sanctions for benefits), it’s just that the issue was that these wages were already too low, not that benefits were too high. The other bottom level was the minimum wage so it was here the demonization was required on top of the 1% freeze on benefits, minimum wage and public service wages (this would then have a weighting effect on supply and demand of wages in the private sphere through the competition for jobs), not just as a distraction from the attack on wages, but to give popular assent to the perceived minimum amount that wages themselves were worth in order to work.

But for a propaganda campaign like this to work that would give popular assent to austerity (with regards the other part of this campaign that involved lowering the average wage – the economics of it – it turns out, this aspect was tackled on misinformation about debt (it is worth noting that there was a ‘popular justification disjunct’ between the claim that austerity was necessary to pay off the debt, and that the debt was in fact rising)), given there were many reasons why people still understood the purpose of a social security system, it needed to meet a large enough audience.

We live in a world of targeted advertising, but it is still not an exact science, to get enough sales you still need to ‘reach’ far more people than will eventually buy. Similarly, the propaganda analogue therefore is that you need to negatively affect more people than the propaganda appeals to, to get sufficient support for the propaganda to push through its agenda. So, if demonization of benefit claimants was necessary, and part of that method was ‘deserving and undeserving’ distinctions. Then sufficient ‘genuine’ claimants had to be demonized in order to ‘get’ the perception of this mythical ‘cheat’ or ‘fraud’, at least in the popular imagination, to be a sufficiently large amount. It is here we get back to the protection racket mentioned above and its relation to herd immunity. In order for sufficient demonization to occur, a certain amount of harassment of ‘genuine’ claimants had to be tolerated. This included not allowing even the ‘genuine’ claimants to protest their treatment lest the Emperor’s New Clothes be exposed and people realise that more people were genuine than the ‘benefit bashers’ would otherwise allow, lest they realise their own behaviour might be more morally questionable than, ironically, the supposed ‘cheats’ they were demonizing. A certain amount of denial of equal rights of ‘genuine claimants’ had to be accepted, which included a silencing of them, even, by their ‘protection racket’ allies, often friends and family (who wanted a clear conscience demonizing other claimants), much as a certain amount of Covid-19 deaths had to be perceived as necessary to protect the economy, which given we are due a recession after this, and again r will have to be reconsolidated with regards g (again – before we had full recovered from the damage done by austerity) would again involve lowering the average working class wage further.