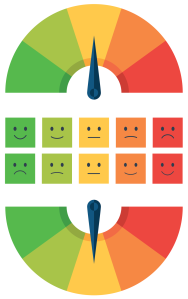 0-29: Totally inadequate life, which does not address the requirements of capitalism. Shows extensive understanding of how to be a productive worker but wilfully resists. Pervasive political engagement on the Left, including direct action. Rejects A-B marches (the only state-sanctioned form of quasi-protest). Has a bustcard tattooed on arm.

30-39: Mostly inadequate life which involves some mildly productive labour, but does not show much evidence of embracing capitalism or working towards improving economic productivity.

40-49: Poor life, which shows some evidence of economic productivity and understanding of what needs to be done, but lacks conscientiousness. Frequent A-B march attendee.

50-59: Satisfactory contribution to capitalism, showing an awareness of the need to make bosses rich and belief in the constructs of “meritocracy” and “social mobility”. However, shows some evidence of political engagement on the Left and dissent.

60-69: Good work, which treats capitalism with the respect it is due. However, still some mild political engagement, including attendance at A-B marches.

80-100: Outstanding economically productive work in virtually all areas of life. Married. Straight. Two children. Owns north London house. Donates to established neoliberal parties and corporate charities – in line for OBE for doing so. Has enabled multiple chief execs to buy yachts. Has a tech startup which will revolutionise mental health in corporate environments, seed capital for which came from remortgaging house. Vocal advocate of mindfulness in schools initiatives. Did a TED talk on helping others achieve their potential.