Gary Writes:- On Wednesday I was admitted to an acute psychiatric ward yet again, after attempting suicide. On Friday I decided to draw Recovery in the Bin’s Unrecovery Star as a way of explaining why I can’t ‘recover’ from my mental distress and how the Social Model of Madness is so often ignored by professionals working in mental health settings. Recovery, in my opinion, has become a buzzword in mental health settings. It’s not that I don’t want to recover, but it is the failure to realise the social, political and human rights issues that stop my recovery.

I began drawing the Unrecovery Star at the table in the communal area of the ward. Patients and staff were interested in what I was drawing and began to ask questions which I answered as best I could without too many personal details.

My named nurse asked to speak to me privately about my art work. I explained to her that mental health services seem to only focus on my ‘symptoms’ and diagnosis of ‘Borderline Personality Disorder’ with ‘psychosis’. The answer, especially when I am sectioned, seems to be to add more medication and the root causes of what led me to be in a locked ward are often not even discussed and ignored. In fact the staff often don’t have time to speak to me at all.

I told her that the despair that had led me to try to take my life had been caused by a variety of reasons. I am in debt as my ESA payments have been suspended pending a fraud investigation as I failed (again) to ask permission to get paid for permitted work. The ever decreasing welfare benefits I live on, the recent stressful events when applying for PIP, the face to face assessment, appealing the decision, and the enormous fear of soon having to apply for Universal Credit that I can’t even face. I told her that any loss in benefits could see me homeless once again. My Personal Budget which helps me to live in the community by employing a Personal Assistant is also due to be reviewed and I expect the budget to be reduced. The thought of having to try to detail and justify the struggles I face, to do even the most basic daily living tasks is horrendous.

I detailed the transphobia I face daily from my family and the nasty arguments I read on social media regarding transgender people. The fact that I am waiting for an appointment at the gender identity clinic and how I feel I don’t ‘fit’ into a female ward. Yet, I don’t ‘pass’ as a man and therefore would be afraid to be on a male ward. The fact that some staff and patients call me by my preferred name but use the wrong pronouns. That gender dysphoria is cripplingly distressing but that I have no support to talk about this.

I talked about the iatrogenic trauma I have endured for the last two and a half decades of being in secondary mental health services and during the many times I have been locked away. I likened it to the childhood physical, sexual and emotional abuse I was a victim of and how I can’t call myself a ‘survivor’ as I am in many ways still a victim of control, coercion, abuse, trauma and power by the very people who are supposed to be ‘helping and supporting’ me to ‘recover’. 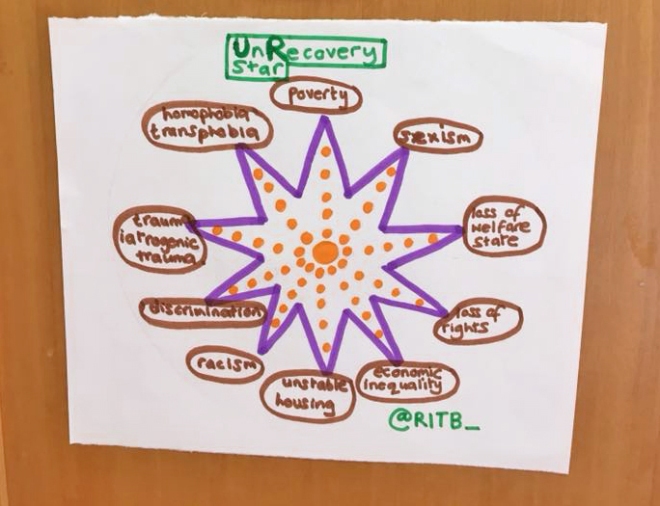 I stuck the Unrecovery Star I had drawn on to my bedroom door and was surprised at the ongoing interest by staff and patients. Some staff have signed it in agreement and with messages of support. The other evening some of the patients asked me to explain more about the drawing and we had an in depth and respectful discussion with all opinions being taken into account and valued.

I’m seeing the Consultant Psychiatrist tomorrow during ward round and I will be taking my drawing to show him and to try to explain the circumstances that led to the desperate act that led me once again to be sectioned. I will ask the ward manager if I can leave my Unrecovery Star on the wall of the ward when I eventually get to leave.

Yes, people like me, need the hope of recovery. However, I believe people need to know that there are many issues that stop my recovery. That I am unrecovered. Society as a whole has to take responsibility for giving me hope of recovery. As I finish writing, I’ve just looked at my drawing of the Unrecovery Star on my bedroom door and I notice two more signatures from fellow patients.

I wonder how many lives could be saved if a robust “Social Model of Madness, Distress & Confusion” was universally adopted. I wonder if my brother may have been saved.